The Work Programme Team at Richmond Fellowship and The Digital College helped Jordan study for a CSCS Green Card and his first job.

About The Richmond Fellowship

The people we support are central to everything we do. We believe that each person is unique, and should have the opportunity to take control over their life, and to develop new meanings and purposes.

Jordan was referred to the work programme in September 2015. Jordan was inducted and it was soon identified that Jordan would like to go into the construction industry as his father had done this for a number of years.

As an individual Jordan came across as a typical eighteen year old man, into his clothes, music, computer games, quite quiet at appointments but also noticeably he lacked confidence in himself. He lived with his mother and younger sister and it became apparent he supports them considerably. Jordan is Dyslexic and attended a secondary school that focuses on students with learning and associated difficulties.

We introduced The Digital College to Jordan and explained this was a learning tool he could use to gain his CSCS card. Jordan was quite nervous about the learning and testing stage due to his dyslexia and he brought this to our attention on more than one occasion. Jordan was reassured he would have 'one to one' support if this is what he required, it was no problem. We set Jordan off on his first module. He watched the tutorial and took the short test at the end. Half way through the test he asked for assistance with reading the questions so his advisor acted as a reader for him. It was identified that Jordan's difficulty was with emphasising the correct word within the sentence which meant he was struggling to understand the question correctly.

What are CSCS Cards?

CSCS is the leading skills certification scheme within the UK construction industry. CSCS cards provide proof that individuals working on construction sites have the required training and qualifications for the type of work they carry out.

Jordon completed his first module with 80%. He seemed pretty amazed with himself and couldn't quite believe he had passed with such a high percentage. Jordan started attending a few times a week for a couple of hours each session to work through the modules. By the time Jordan had completed the third module his confidence had improved so much he was now completing the tests independently without a reader which was a great breakthrough. He completed his Level 1, Award in Health & Safety in Construction with an average of 86% which Jordan and the team were extremely proud of. It was evident at this stage that Jordan had the skills to be successful.

January 2016 a job opportunity came up through JCP for a Trainee Construction Worker for a new development locally. We spoke to Jordan and agreed it would be an ideal opportunity. Jordan received interview techniques and we recommended he speak about the e-learning he had completed on The Digital College for his CSCS card. Although nervous, Jordan was successful with his first interview and was invited back to attend the second stage. A couple of days waiting and JCP advised the good news, the job was offered to Jordan. Jordan of course accepted the job.

Learning resources from The Digital College

Jordan continued with the second part of his e-learning, 'Preparation for CITB Health, Safety and Environment Test' using The Digital College. Jordan continued to attend regularly and completed all modules independently and passed the final stage with an overall score of 86% which was a fantastic result. The team congratulated Jordan on everything he had achieved so far. Jordan has always shown his gratitude and said he could not have done any of this without Richmond Fellowship or The Digital College.

With the assistance of Lisa at The Digital College Jordan's final test day arrived and we felt it would be beneficial for an advisor to accompany Jordan to the centre as he was quite nervous. Lisa made arrangements for the questions to be given to Jordan by audio to accommodate his Dyslexia. He took the exam, unfortunately he did not pass this time. Naturally he was disappointed however, there is always next time.

Jordan started work the following week and has now successfully completed two weeks. We continue to support him and he is updating us with his progress and when his retest will be. He is a very different individual from the person we met in September. His confidence comes over naturally and always has a lot to say. 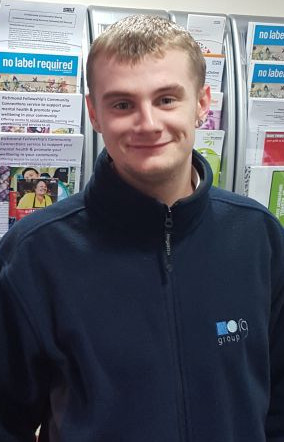 Working with Jordan has been a real team effort for the Work Programme Team at Richmond Fellowship. We have pulled together each others strengths to enable us to support Jordan in the most effective way possible. We all believe The Digital College e-learning has played a major part in Jordan's success. He found the tutorials very straight forward to learn and was comfortable with the language used. Not only does this tool give clients the knowledge and qualification it has also gives clients a real confidence boost which is a valuable quality when seeking employment.